On 21 January 2021, the COLOTAN Consortium had its Pre-kick off meeting which consisted of an informative session given by the project coordinator (KU Leuven) on the implementation of the project, focusing on the ‘start-up’, the ‘planning’ and the ‘next steps’ to kick off. Furthermore, the European Projects Advisor at LRD department of KU Leuven gave a presentation on the ‘project execution’, ‘budget rules’ and the ‘consortium agreement’ according to the H2020 Programme rules and regulations.

On 22 January 2021, the Recruitment Event of the COLOTAN project was organized virtually. From an initial list of more than 400 eligible COLOTAN candidates (application deadline was 8 December 2020), 22 were preselected to be further interviewed by the Recruiting Committee at this event. Eventually, 12  out of the 13 ESR positions were filled in while a decentralised procedure was followed for the remaining position. The selected early stage researchers will start their assignment in the coming months, so that all of them will be operational by the official kick-off meeting in June 2021. 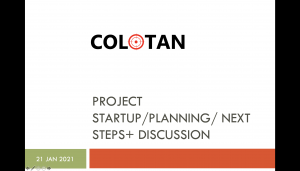